September 11, the Global Financial Crisis, and our current multi-crisis dilemma!

All warnings that Our Path needs a Radical Correction.

The amazing Human resolve, ‘solved’ these enormous attacks on ‘The System’, each time, we have denied our cancerous state.  But now Nature has stepped in with the terminal Extinction Warning. We won’t win this battle, so best we urgently confront ‘The Cancers’.

It goes without saying:  We are living in deeply unsettling times. Both in the USA, and globally, there is deep existential exploration for ‘The Answers’, but surely we first need to diagnose the problem? And Trump can’t be to Blame?

I wonder if you also see that these times are manifestation of a long deteriorating, Chronic Human Condition, and how it has notably intensified in recent years?

So, let’s trace this ‘Chronic Condition’, back to its Three Cancers. Cancers that largely went ignored for decades, but are now each in chronic state and further, metastitising off each other: 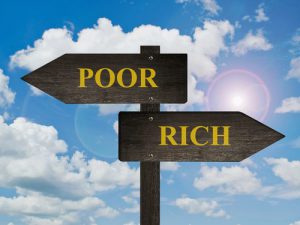 This is the ever increasing ‘gap’ between the wealthy and non-wealthy, the so-called Rich and Poor, The Elite and non-elite, The 1% and the 99%, etc. Whether The Divide be between Nations, inside Nations, or intergenerational, neither its existence, nor its growth can be denied.

Wealth is directly linked to Power. Increasingly powerless, those on the other side of The Divide, are revolting with anger and resolve. turning against ‘The System’, they see as the creator of their downward spirally, increasingly hopeless predicament.

Both in the US and globally, this ever-increasing Divide is undoubtedly one of the biggest contributors to society unrest today, and its cancer has reached chronic state.    Read more on The Divide here.

‘The Void’, is essentially the manifestation of the non-existence of any ‘Beyond Human’, Higher Context, for Human Life. Ie  Morally / Ethically and ‘Grand Truths’ contexting of how us humans fit in to the greater scheme of The Planet and The Universe?

Essentially this a Spiritual Void, but beyond a narrow, religious connotation.

Religion has largely provided this ‘context’ in the past, but today, Religion, Science, Technology, and New Age Spirituality, in their unique ways, have all made their significant, albeit sometimes unintended, contributions to the rapid ballooning of  The Void.

Americanism ideology, with capitalism as its engine, and human created money as its blood, has almost become the new, and unlikely, ‘Spiritual’ context for Life.

Where Unfettered Freedom and Hedonistic Happiness are deemed ‘Spiritual Success’, Materialism the mode, and Money the means. Void of any ‘Higher Belonging‘ context this has produced the dysfunctional, fear driven, hedonistic, ego-centred, ‘money grabbing’, society that we see today.  One increasingly disconnected from Nature.

Humanity is in a cancerous, Spiritual Belonging crisis, and The Void is its ‘witness of account‘.  Read more on The Void here. 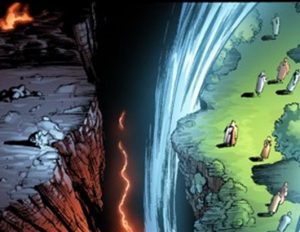 The Chasm is the ever-widening ‘relationship impasse’ between Nature and Humanity. It started with a fracture back in 1969, and as the graph below shows has increased in size ever since. This to our current situation where our total human demand on Nature’s bioregenerative resources, requires more than One Point Seven Earths:  That 70% more than Nature’s, One Earth, full ‘output’, can provide. In a US context:

If everyone in the world, lived like the average American today, ‘we’ would need almost Five Planets!! (All the Ecological Footprint data is thanks to the Global Footprint Network.)

Climate Change is really just one of the many symptoms of The Chasm, and undeniable evidence of the cancer of this long-broken relationship between Nature and Humanity, Read the full script on The Chasm here.

“It’s all about ‘Our Human Belonging’ ….Stupid!” 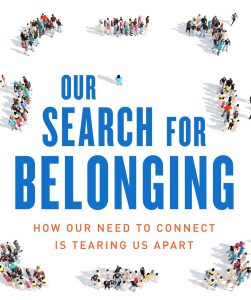 ‘The Divide‘, ‘The Void‘, and ‘The Chasm‘, the cancers of Our Chronic Condition are all pointing to a deep Human Belonging Crisis.

This at the Individual, Society, Nations, and ‘Cosmic’, levels. The world’s adoption of Americanism ideology as our ‘religion’ is the seemingly fatal flaw.

To avoid a cancerous demise, we urgently need a dramatic course change towards a, ‘Cancer Free’, ‘New Belonging’ context. No nation is immune, nor exempt from being vital collaborators in this cancer like, Humanity Existential Challenge.

As ‘THE most powerful nation in The World’, The World looks to the US to lead the way to this ‘New Belonging’, context, but the path is short cutting us to Exctinction.

In the past two years, Trump has shown the world clearly how he sees this ‘New Belonging’ working!  Both for himself and America: His stance epitomises Americanism, but just for America.

The World has understandably ‘Not reacted well’!

America has moved into its own ‘deepest ever’ National Belonging Crisis.

But is it Fair to Blame Donald Trump?

Trump merely is a product of Amercanism, and a growing number of Americans are are seeing the cancer of Americanism. This isn’t about Americans, but rather about and Americanism ideology that has overtaken  The World.

In our ever increasingly secular world,  and the vast and expanding Spiritual Void, Americanism is now a de factor religion, and the most popular one globally by far.

At the heart of the ideology is a illusion of Freedom. This beyond Democratic freedom, but rather an Individual Freedom Dream linked to Economic Freedom ‘Success’. A Freedom now free of any Spiritually based moral / ethical restraint, and driven by an algorithim that promises more unconstrained freedom with more money, wealth and power. A Freedom that works on Machaivellian Competion requiring Domination and Exploitation of others.   This breeds a cancerous Freedom that is void Responsibility:  Resposibility to some bigger, cosmic story.

Facebook (and all its social media offshoots), Google, Amazon, Apple, Uber, AirBnB, all the Chinese equivalents, etc are the pervaders of Americanism. Systemitizing, human relations, so we are all Americanised in relationship Contact, with capitalist rewards for each one of us, as the Only Goal.

In Nature and Our Spiritual conection lies our ONLY source of solution. We did belong deeply ‘ONCE”, and therein lies hope….

Without Nature We Are Nothing!

In the above mantra is ‘The Bigger Cosmic Belonging Story‘!