Skip to content
One Point Zero > A New World > Nature & Earth > Systemic Change is Needed > The Divide: Our Wealth Gap

The Divide is the manifestation of the extent of Personal Wealth / Income polarization within a Society.  An increasing polarization and inequality in the distribution of the Wealth, Income, and Material affluence, points to an increasing potential for fracturing of a society’s social coherence.

The Divide can refer in context to ‘The Rich and The Poor‘, the ‘The Rich and The Rest’, ‘The 1% and the 99%‘, the ‘Millenial and Babyboomers, etc, etc.  It is typically measured in relative Annual Income, or relative Net Asset Value / Net Wealth.

The Divide is in evidence across Nations, within Nations, and also across Generations.

Often not included in ‘Wealth Gap’ definition is the generational Wealth gap. This being the relative affluence, cost of living and basic life affordability, situation between the ‘young of today’ verses the ‘young or yesteryear’.  Another word could be the Relative Age Affordability Gap. This is an increasingly worrying ‘Gap’ as it is increasingly looking like the millenials will be the first generation who will be less affluent that their parents generation was.

The Divide becomes a good barometer for the degree of Fairness or Non-Exploitation within a community. In today’s world, where money controls almost everything we do, The Divide almost translates to an indicator of the ‘Distribution of Power’ within a society 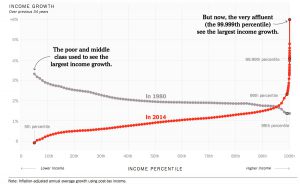 The unprecedented consumption centred growth of the past decades, fueled by ‘Thin Air Money’, has created the biggest USA and global, debt ever, with the elite the major beneficiaries, and the non-elite left, further and further, behind.

The increasing adoption of Technology has systematized jobs, requiring less skilled employees and / or made them redundant, and brought in a Knowledge economy.

Top Management to Front Line Worker Remuneration ratios have moved from the low twenties in 1950’s to being in the ‘one to two hundreds’ today, depending on nation of the world. This is a massive widening of pay.  There are many and diverse reasons for the increase in the gap between so called ‘Blue and White collar’ workers, but beyond the wage gap it’s how a dual economy has formed that enables those with money to make many multiples more money from that money. While those just getting by, can’t access this leverage base second economy. This is discussed later below. The net result of all this is like a leveraging of The Divide, withing societies and Nations.

Clearly this isn’t about a simple, well defined, Divide Line, but as the graph above, and many others show, there has been a distinct polarizing effect taking place, and there is a trend which shows that The Divide has been continuously growing for decades now. Ever more splitting our ‘Human Belonging’, and with dire consequences:

The Consequences of The Divide

This ever-widening Divide is undoubtedly one of the biggest contributors to global society discontent, today.  In the US, the elections are seen as essentially an exclusive and indulgent contest for the elite: The plutocracy. Around the world corruption rears its ugly head, and invariably it is about the elite feathering their own nests through their close association with The System.

With so many different causes, it’s not so much about the why, or a justification it is dealing with the reality of  how the ‘other side’ of The Divide, are feeling increasingly powerless and disenfranchised with ‘their lot’.

These are not Republicans or Democrats, nor just Americans. These are the enlightened populists around the world, who are now turning against ‘The System’, which is the ‘creator’ behind their predicament, and fueling the ever widening of ‘The Divide’ by design. They are blaming the elite who are seen as its architects, and primarily for their own gain. In their despair they are increasing choosing to revolt with antagonism.

The heart of the problem of The Divide is essentially the increasing role ‘Money and Materialism’ is playing in Defining Success in the World today. This is about an Ideology

The Divide and its Ideology Catalysts

TheWestern Ideology, with its focus Success, Fame and Power linked to  Materialism and Wealth, has brought with it a culture where Conspicuous consumption, and the ubiquitous Pecuniary Struggle run deep in the core of society’s Way of life, Values and Beliefs.

Wrapped around this conspicuous consumption culture, and its linked pecuniary struggle, is an ever more sophisticated marketing machine that brutally exposes societies winners from its losers, based on Wealth / Material affluency lines.

This increasingly links wealth directly to a desperate and unrelenting struggle for identity and self-esteem. The exploited, on the other side of The Divide, become increasingly enslaved and powerless, and yet unable to extract themselves from the demeaning and never ending struggle.

Given that in today’s world ‘Money‘ is linked to Power, The Divide, and its dramatically skewed Wealth distribution is closely linked to the breakdown we are seeing in Democracy today. Disproportionate Power leads to and ever increasing exploitation possibility, and in the mechanics of capitalist system this is ‘potential is brought to effect’, resulting in the increasing Wealth Divide, and the exploited becoming, ever more enslaved with no hope of extraction. Once this hopelessness sets in, animosity and resentment takes over and the result is that society starts rapidly fracturing, and the cohesion unravels.

This polarization of society, into the ‘Haves’ and ‘Have nots’, or the ‘elite and the non-elite’, etc, results in the forming of ‘enclaves of opposition’ to the powers that be, and the system responsible.

The form, and basis of ‘protest and challenge’ that these enclaves take, can vary widely, often, seemingly disconnected from their primary, Wealth Divide, cause. The anti-Immigrant movements are eventually about jobs, money and a continuing erosion of people’s economic power.

Almost all the huge global political shifts under way today ultimately have the discontent of The Divide as their true source of energy.

The World Bank on ‘The Divide’ and Increasing ‘Inequality’.

The Gini coefficient is a much-used indicator of describing the wealth distribution within communities.  A Gini coefficient of 0.0 means a totally equal society, and one of 1.0 means one person has ALL the weath!  Almost without exception, nations around the world have Gini coefficients that are trending upwards. Ie the societies are become less fair in wealth distributed, and also increasingly polarized on wealth and income. There are a few exceptions, in very socialist countries, but this are true exceptions bucking a global trend.

Many studies have shown that social stability, and crime rates are strongly correlated to the society / nation’s Gini coefficient. Increased Happiness is strongly correlated with communities which have lower wealth variation, or lower Gini coefficients. Essentially it provides a very reliable indicator on the Health, Fairness, and degree of Egalitarianism of a community. Read more here

Wile The Divide captures a much larger envelope of Wealth / Income / Material Affluency disparity, the Gini coefficient work, supports the view that of the cancerous nature of The Divide today.

‘The Divide’, ‘Equality’ and ‘Fairness’:   A One Point Zero World Context

One Point Zero does not believe in the ideal of an Equal Society, where everyone has equal wealth, or the goal is to move towards equality, etc. There has been, and always will be, a continuum of wealth and income disparity across non-communistic societies. The issue defined here as The Divide, is about the ‘large and rapid’ increase in polarization between, those with Real Wealth, and those aspiring to break free from a Sustenance Living struggle. This Divide has dramatically escalated over the past two decades.

One Point Zero believes in a Fair Society, where people should have equal opportunity, and Wealth should be Fairly distributed based on Risk, Effort, Entrepreneurship, and one’s true value add to Community.

The issue then becomes:  What is Fair?

The Capitalist view is:  That provided a person has an alternative choice for income, they are voluntarily chosing their situation and its virtual enslavement, so therefore it is a fair arrangement.

The Issue of Fairness, and what constitutes ‘Fair‘ has probably been debated since the day humans became TWO!  Over history the issue of Fairness comes up for heated debate, sufficient consensus is achieved, and things subside again. One Point Zero believes that we are entering a new era and new context needed for Fairness.  The Chasm and its cancer, is bringing the magnifying glass onto the subject, and we explore this below:

In the context of The Chasm, The Divide, and The Void ‘cancers, and our Chronic Condition today, One Point Zero asks the question of The Capitalist:

“When is Enough enough? Why do you need such exhorbitant rewards, and seek more and more wealth?”

This may bring some new light to Fairness, Our Chronic Condition, and how the Three Cancers metastisize off each other.

The Linked Crisis of ‘The Divide’:  The Real Planet Pillagers 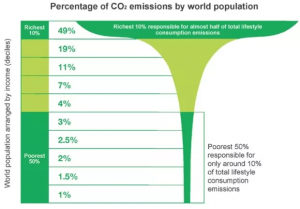 Almost without exception they Spend It with the same Disparity, and in the process, they are the vanguards of increasing The Chasm between Nature and Humanity: One of our Three metastisizing cancers, contributing to Our Chronic Condition.

To quote from Oxfam:  “Someone in the richoest one percent of the world’s population uses 175 times more carbon on average than someone from the bottm 10 percent.”

While the The Divide may be ‘justifiably’, deemed ‘fair’ and defensible by its beneficiaries, one surely cannot then conclude that using such a disproportionate share of our very scarce ecological capacity, and so widening The Chasm so disproportionately, is also ‘Fair’?

One Point Zero believes this is ‘Grossly Unfair‘and asks:

Is that REALLY Fair?  When we are more than 70% over drawn on Nature’s resources that can provide us with our life needs, including dealing with our huge carbon overload.

‘The Excuses’:    That Keep our ‘Chronic Condition’ ‘Worsening’

The Wealthy hide behind the ‘excuses’ that first, their ‘numbers are very small’, so their contribution to The Chasm is minimal. In this regard it isn’t just about their relatively small ‘crowd’ they miss the huge aspirational impact this ‘small crowd’ has in leading a whole of society knock on of, “wanting ‘more and more’, to be successful like them”, cascade. The cascade we witness every day, and which fuels the advertising industry, and all the aspirational brand revenues. 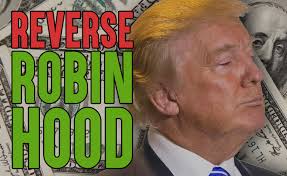 Their second ‘excuse’ is that their disproportionately high taxes, investing and spending all create ‘Money and Jobs’ for the economy.  Always pointing to Recessions being the most damaging for the ‘less wealthy’! Yet its this fueling of consumption that is feeding Our Chronic Condition today.

It is this latter, ‘Robin Hood Excuse’ and their ‘Identity defining’, requirement to live in their ‘hedonistic exclusivity’ that lies the impenetrable mindset barrier, for non-starting on the design of ‘The Perfect Recession’, we so desperately NEED! (Read about The Wise Human’s Solutions here.)

Money is at THE Very  Centre of Our Chronic Condition!   How we create it, how we earn it, how we spend it, and how we share it out. It feeds all Three Cancers: The Divide, The Void and The Chasm.

Nature has a total different way of how we should create, earn, and share ‘it’ out. But ‘we’ HAVE to throw away today’s ‘Thin Air Money‘ and use Nature’s Real Currency! More soon!