Skip to content
One Point Zero > Uncategorized > Pedalling Against the Traffic! The Adventure gets Serious!

I can’t believe what I have experienced in the past 24 hours.

Twenty four hours ago I was on Cap Capricorn entering Long Beach harbour, and in my ‘home’. I was on the bridge witnessing the most incredible port entry and docking of them all. This was professionalism of the highest level, and Andy Mayer, the Pilot and the leader of the team that did it was so relaxed we were having deep conversations as he was directing the two hour operation! 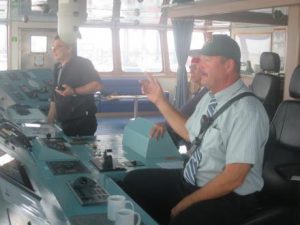 This involved two sharp 90 degree turns, a 180 degree on the spot rotation of Cap Capricorn with less than 50 metres space all around. Then finally a long reverse up the channel to our berth. Long Beach is quite some maze of a harbour.

Then it was the goodbyes, to all my crew friends, and I have to say the one on one with the captain and the words we exchanged brought welling tears to my eyes. From the deckhands, to the cook, to the officers and The Captain, many gave me warm hugs, and with all I could feel they had really enjoyed having me and I had really enjoyed being with them, in their space. Why would I ever want to fly again….?

With excitement and a wee bit of trepidation I loaded the panniers on the bike and with verbal instruction from more than four people who all were fascinated by my adventure and wanted to help. I set off on the next leg of Trumped by Nature. Was I going to get trumped by Long Beach harbour, the maze of bridges highways all immersed in two oil refineries, and a vast industrial area.  Earlier from the ship’s bridge I’d confirmed with Andy the distant sprawl of LA to the north, even Hollywood hill almost direct ahead.

My ‘people Google map’ had brought me lots of stimulating interactions, and three people who loved the One Point Zero story, my sustainable travel goals, and their desire to follow the adventure. As I took them out of their rational worlds, I’d connected to their souls, and them to mine, and I thought back to literally the hundreds of people where I had spiritual connections that started from a seemingly simple functional need:  “Excuse me?: Do you know how I get to such and such a place?” We are losing our human and spiritual connection through technology….and so fast I’m not sure Bill Gates’ One Point Zero project make the ‘latest possible start’ deadline!

Thanks Andy, Louis, Jim, for your help, hope you enjoy the journey with me……!

I was soon in Long Beach, in another world of touristic attractions, beaches, and ocean promenades….. A quick stop to capture the old and the new of passenger travel brought me into an emotive hour long conversation with three recreational fisherman.

It also started with a functional question: “Hi guys! What’s the best road to San Diego?” I thought they had seen me park my bike, but clearly they hadn’t:  “Just head out east to the I-5 and it’s then just straight 110 miles down to San Diego, brother”.  Knowing that wasn’t my route I said: “I’m on a bicycle man and looking for the Oceanside road.” Well that just blew these guys minds, and started a whole story that went to One Point Zero, connecting to the elite and bringing them with us on to the Presidential elections.

Not enough space here but when I said to them that they need to demand some ‘no vote mechanism’ that forces a no election result and a need to go back and find some candidates we want, their eyes lit up shouted in tune: “I hadn’t thought of that?  Yeah, man that’s what we need: To be able to say we don’t like any of the candidates and ‘they’ must bring some better ones. I like that, man”. We all know the state of election play in the US at the moment, but feeling their seriousness connection with their country and yet despair in what they saw ahead was moving for me. Sadly each time I think about where this election is at, I feel huge pain at knowing One Point Zero isn’t part of either candidate’s vision or priorities. In Bernie there was some glimpse of hope, but with Trump its full speed ahead on a turbo charged vision for American only anthropocentric success, and for Hilliary it’s just more of the same of the Success that The Facts show isn’t success.

I was finally on Ocean Boulevard, a pleasantly easy ride along the beach, eventually connecting with PCH-1 (Pacific Coast Highway) that took me to Laguna Beach where I’m writing this from.

My Soul feels the Traffic Against ‘Us’

For many people the ride I was on would be a truly amazing ride, but I have to say I didn’t sleep well last night, and as I lay awake listening to my soul. I realised that yesterday was a day when I felt a loneliness I haven’t felt too often before. I was there often riding alongside many cyclists, or passing people walking to the beaches, or sharing coffee snacks with fellow café users, but always I sensed I was the so different one.  I tried to strike up conversation but it was as though I was the man from mars, people.

It hit me that I was I was in the middle of an anthropocentric world, it was 4th of July long weekend, and self-indulgent pleasure was the priority. San Francisco is a city, and I don’t expect more, the cities are 100% man’s domain, but here I was immersed in Californian ‘wilderness’,

People everywhere were out ‘in Nature’, but I didn’t get a sense of people belong with Nature they just appeared to be using Nature for their pleasure. Thanks to the state and parks control, it is all a very orderly and no abusive use of Nature, but it wasn’t the feeling I had when I was in the equivalent of the New Zealand, I’d just left. It hit me how huge this change from anthropocentric orientation is going to be….

I’m sad and looking at today to try find strength in my spirit, that same strong spirit I described in my response to Bob’s comments.

It did occur to me that I was maybe over reacting and not dealing with my recent disconnect with heavenly ship life and all the belonging that went with that? I do sense that this is the start of the real extreme Howard adventure: How to deal with going upstream against a huge current that doesn’t even know the old natural river flowed the opposite way, to this human engineered reverse flow canalisation!

OK, there we go: I said you’d get it straight from my heart…. The ups, downs and all of it…!

Talk to you again from there….