Skip to content
One Point Zero > A New World > Our Only Ever Rollback Successes: The Three Recessions

The Three Recessions in the last 50 Years 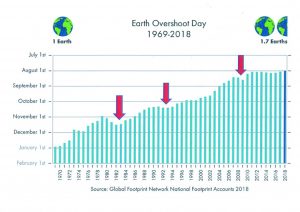 The ‘Three Red Arrows‘, Recessions and the only times in History that we have ‘Rolled Back’ our ever growing Debt with Nature.  And to quote Wikipedia:

“The early 1980s recession in the United States began in July 1981 and ended in November 1982. One cause was the Federal Reserve’s contractionary monetary policy, which sought to rein in the high inflation. “

We all know only too well the Global Financial Crisis of 2008, that caused the ‘blip’ rollback in 2009.  The ongoing sluggish global recover is probably a big contributor to the subsequent flatter trend from 2008 to the present!